Clinical updates are concise articles designed for educational purposes on clinical issues that relate to practice.

You are required to develop Clinical update on Emphysema

Underlying mechanisms of alterations in airway compliance and CM

Emphysema is a progressive ailment of the lungs that occurs due to the inflation of the alveoli. Typically, emphysema is characterized by destruction of alveolar wall and permanent enlargement of airspace of the terminal bronchioles (Manwar, Awandkar, & Khode, 2015). In most case, the term emphysema is used reciprocally with chronic obstructive pulmonary disease (COPD). Despite, the advancement in the field of medicine in Australia, emphysema is still the primary chronic disease, and it has a high prevalence (Jones, Pisano, Elsobky, & Watson, 2015). Recent studies have shown that 60% of the Australians suffer from COPD and it has contributed to thousands of deaths. Moreover, emphysema was more prevalence in men because of their smoking habits, but that is not the case in our contemporary society as women are more vulnerable to the development of emphysema. Typically, COPD is often incurable but mostly preventable and manageable.

The paper seeks to discuss the pathophysiology, and types of emphysema. Understanding the pathophysiology of a condition is essential as it will assist a clinician to manage the disease effectively. Also, the paper will discuss the mechanism of alteration in air compliance, risk factors, diagnostic tests, and the management of both acute and chronic emphysema. Lastly, it will explore on the preventive measures and palliative care of emphysema.

The main function of the lungs is to help in the process of breathing. Respiration is the process whereby the oxygen from the air enters into the red blood cells while the carbon dioxide gas leaves the blood through the process metabolism (Manwar, Awandkar, & Khode, 2015). Lobes are divided parts of the lungs; the left lung has two lobes the lower and upper while the right lungs are made up of three lobes. Usually, when the lung is damaged the process of respiration gets hindered thus, making it difficult for a person to breath well.

Lung injury is as a result of a vast pathogenic process that takes place within the lungs. Typically, the lung injury might occur because of the destruction or through inflammatory processes when the lungs get exposure to smoke. Usually, when dust or tobacco are inhaled into the lungs, it first comes into contact with the alveoli which prompts the inflammatory response. (Eltboli, 2015). The immune cells include CD8 positive, eosinophils, macrophages, CD4 positive and lymphocytes polymorphonuclear cells. Then the immune cell transports the foreign particles to the bronchial where neutrophilic chemotactic factors are released. Also, macrophages which are high in the alveolar release Proteolytic enzymes which in turn leads to the destruction of the epithelial cell barrier. It is presumed that the release of cytokines reduces the flexibility of the alveolar walls which ultimately leads to the rapture of the alveolar walls (Troy, & Corte, 2015). The late stage of emphysema is associated with fatigue, depression, Wight lose and headache. 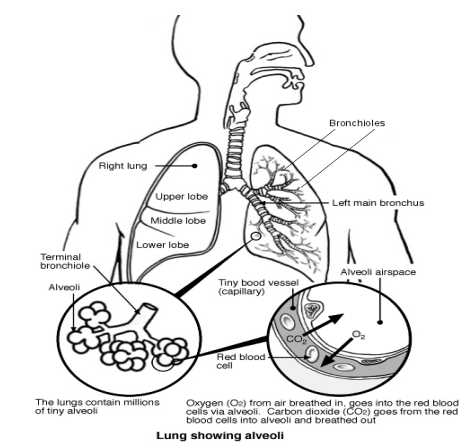 There are two primary types of emphysema centriacinar and panacinar. Centriacinar emphysema is also known as centrilobular. It is the typical pulmonary emphysema mainly found in the upper lobe of the lung and primarily confined to the proximal bronchioles with focal damage. Recent studies have shown that centrilobular is most common among the smokers. According to Schellack, & Omoding, (2015) Smokers are more susceptible to centriacinar because the tobacco smoke infuriates the alveolar macrophages, which in turn triggers the release of neutrophil chemotactic. Typically, the released chemicals are responsible for the damaged of epithelial cell barrier. Also, prolonged smoking which might cause chronic bronchitis, prejudices the smoker to repeated and secondary infections.

On the other hand, panacinar is prime in the lower lobe of the lungs. It is also known as panlobular. Typically, panacinar damage the entire alveolus consistently and it is common among patients with alpha1 antitrypsin (AAT) deficit. Moreover, panacinar is characterized by the permanent destruction of the whole acinus distal. According to Ostridge et al., (2016) Panacinar emphysema is a hereditary condition. SCN 2203 Assignment: Clinical Update

There are many risk factors associated with emphysema. Typically, the most critical risk factor is tobacco smoking. Recent studies have shown that long-term smoking is the main risk factors that predispose a person to the development of emphysema (Cho et al., 2015). It must be noted that the longer you smoke, the higher the risk of developing the chronic obstructive pulmonary disease (COPD). Usually, the inhaled smoke directly affects the cells which are responsible for clearing the mucus, and it damages lung tissues which result in difficulty in breathing.

Moreover, the second risk factor for emphysema is industrial exposure to chemicals and dust. Recent studies have demonstrated that long-term exposure to vapor, dust, and fumes in a workplace inflame and irritates the lungs which lead to the destruction of epithelial cell barrier. Thirdly, genetics is the risk fact that predisposes a person to the development of emphysema. For instance, genetic disorder alpha1 antitrypsin (AAT) deficit is the primary cause of panacinar emphysema (Oikonomou et al., 2015). The primary function of alpha1 antitrypsin (AAT) is to protect the lungs. Therefore, its deficiency affects the lungs. Recent studies have demonstrated that genetic factors make cigarette smoker more vulnerable to the development of chronic obstructive pulmonary disease (COPD).

Furthermore, individuals with asthma and they smoke are at a higher risk of developing emphysema because the amalgamation of asthma which is an inflammatory respiratory disease, and smoking makes one susceptible to chronic obstructive pulmonary disease. Also, age is another risk factor for emphysema. Typically, COPD develops slowly over a long period, for instance, signs and symptoms of emphysema begin to manifest when one is 40 years old. emphysema is common among old adults. It is a progressive ailment that takes time to develop (Cheng, & Mohammed, 2015,). Lastly, people who are from developing countries are at a higher risk because of smoke from burning fuel. The inhaled fumes from burning fuel irritates the lungs which leads to the destruction of epithelial cell barrier. When the alveoli are damaged an individual will have difficulty in breathing.